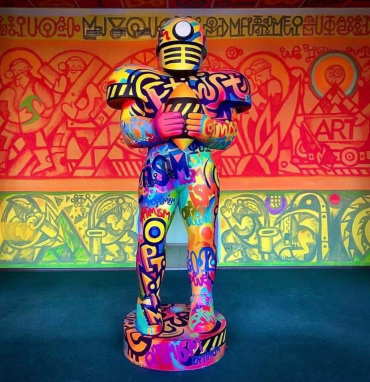 Roman Minin has been working on his  Miner Rugby Player series since 2007, cre ating only one sculpture per year. Within  the framework of this project, the artist  engages with the image of a player, which  is embodied as a steadfast tin soldier fig ure, a generalized chess pawn, a faceless  cog. The player’s plastic form though seems  to be brimming with monumental beauty  and artistic energy. The artist concentrates  the essence of these two masculine pro fessions in one figure. The sculpture is an  allegory of the effect of geopolitics on  Ukrainian culture and mentality.

2020 has been a unique year for the en tire mankind. During this period, Roman  has been creating abstract digital compo sitions tackling the issue of optimism. His  optimistic rugby player symbolizes obsta cles overcome and the general faith that  supports everybody. He seeks to fulfill his  mission at any cost. The struggle contin ues, even if characters and their arsenal  change; at present, they are clad in the  armor of optimism